Where: Philadelphia to Washington DC 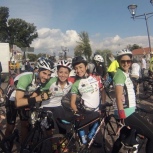 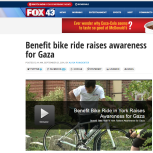 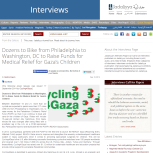 The Face of Gaza
Mondoweiss, October 2014

Riders Needed for 350km US Cycle Trip to Aid Gaza
The National, July 2014

Half a World Away 300km Ride will Aid Gazans
Barakabits, July 2014

Residents in UAE Gearing up for Charity Cycle Ride to Help Children in Gaza
7 Days, September 2014

A few sincere words from our 2014 cyclists:

I can’t believe it’s been a week since we finished our Cycle 4 Gaza! I have experienced many emotions in the past week, and I am now just settling into real life once again.

The overwhelming feeling I had during the 3 days we spent cycling was one of immense pride and joy, interspersed with moderate/severe pain in my bum, quads and calves! The highlight for me was meeting all of you, and getting to share this amazing experience with a group of the most awesome people I have ever met.

I have never been on such a high as I was when we reached DC, and I have to give a shout out to my man Ahmad AbuNamous for showing us that anything is possible if you put your mind to it.. so proud of him!

I left DC on Monday, and I felt a great sense of sadness and loss as I was boarding the plane back to reality… but that was soon replaced with a warm, fuzzy feeling and a sense of accomplishment and gratification unlike any I have felt before.

I am hooked! and I hope that I’ll be able to do it again and again.

Thank you to all my C4G mates for making it one of the best experiences of my life.

C4G was an intense experience from both a physical and mental standpoint. Not only did I push myself to the limit and drew energy from an amazing group of people, but I also made great friends in the process. The organizing team is professional and they set up an itinerary where I got to see gorgeous landscapes in the US that I had never seen before. If you’re reading this and decide to join, we’ll probably meet and ride together in the future.