Where: Aqaba to the Dead Sea 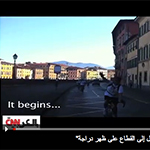 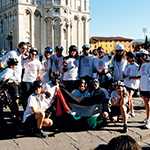 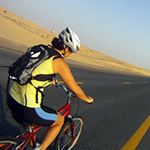 Cyclists Gear up for Gaza Project

“Cyclists Gear up for Gaza Project”
The National, 1st October 2011

From Jordanian cyclist Sa’ad and his 13-year old son Karim:

“Your fantastic initiative has inspired and energized all of us and we are truly motivated to do more critical-mass rides for a good cause – Gaza. The 3 days and the 350 K’s was truly a thrilling, memorable and an outstanding experience for me, Karim and I think we can speak for all of us! I honestly hope we can do this on a regular basis to encourage more & more people to bike for a good cause and naturally to raise awareness and more donations for the people of Gaza.

What Karim, and I for that matter, learnt from the experience, when we heard [cyclists] Ramzi and Adnan talk about their first-hand personal experiences in Gaza, is now etched in our minds and it will give us more reason and more cause to do our utmost to help the seriously deprived and underprivileged in Gaza.”

‘Look straight and keep cycling!’ – that was what I kept telling myself over and over again during the 3 days that we cycled 350km from Aqaba to the Dead Sea. As a complete novice cyclist (I had only managed not to fall off a bike twice prior to this trip), my friends and family all thought I must have been insane to even consider this challenge. And 10 minutes into the first day, after I left a little part of my right knee on the streets of Aqaba and managed to knock over another cyclist I started to agree with what they said. However, I only gave myself one option every time I fell which was to get up and keep going. After my third fall, as I learned that perhaps my skills were more suited to cycling a little further away from the rest of the group so as not to take any more victims down with me, I had some time to reflect on this challenge as I pedalled away, occasionally in fear, down the Jordanian highway. The magnificent landscape and the sense of freedom was overwhelming but at the same time brought a tinge of sadness with the knowledge that the children of Palestine, only a few kilometres away, do not have the same fortune that we all had. And as my wounds amounted- albeit superficial, my thoughts extended to the children that suffered debilitating injuries and the strength that they must have to keep them going everyday, which immediately wiped out any self-pity. I was also incredibly touched by the encouragement and support that every single person in the group offered me on a daily basis as I wobbled along the way on my two wheels. I was blown away by the passion that everyone had towards the situation in Gaza and the ability to channel their feelings not towards anger or spite but into a common dream of building a better future for Palestine through education and healthcare (and cycling!). By completing this challenge, we are one step closer to giving hope to these children and making a positive change. I hope that one day, we can stand alongside all Palestinian children to show our support and that they too can rise up to their challenges and have a brighter future.

“A few months ago I signed up to take part in this year’s Cycling4Gaza initiative, knowing full well that the experience would be fun and challenging. What I wasn’t prepared for in any way was how moving a trip this could be. It moved me personally, emotionally, physically… in every way possible. The people I shared these moments with at the time were wonderful people dedicated to a certain cause, one of equality and the removal of oppression. That was what I felt then.

Sometimes, you don’t fully appreciate something until it’s gone. In this case, I’d say I didn’t fully appreciate something until I returned to my life in London, distracted and working pretty hard as most of us do. Maybe it was simply the fact that I now have time to reflect on the people I ventured into the desert with. Reflecting also on the brief yet colourful conversations I had riding through Jordan, within view of our beloved Palestine.

Whatever it was, I now know that I was immersed in something very special on our trip. This unknown ether that surrounded us was pure gold, put there by some undescribable force in an undescribably way, but definitely there. It allowed us to remain strong, determined and happy throughout what was an incredibly challenging event.

A memory that will stick with me for a long time is one which revolves around the impatience of Jordanian drivers. If ever any of our bikes so much as steered off course a few inches to become noticed by passing traffic, we would hear a throng of horns warning us of what was coming up from behind at lightning speeds. On one occasion however, fellow cyclist Mohammed and I managed to unfurl the Palestinian flag between our two cycles, riding along one lane at a very moderate speed. Bang in the middle of the desert where there is no speed limit whatsoever. The other lane was occupied by a media group filming us. Not hearing any horning or impatient drivers I began blessing our luck that we did this at a moment when the road was completely clear on both sides. A few minutes into this, I managed to retain enough balance to swivel around and look behind, expecting to see a clear empty road. I saw that a row of the same aggressive drivers had been crawling behind us at turtle speeds, in what seemed to be the most powerful show of respect and empathy that I had seen. No horns, no speeding, no abuse. Silence. Recognition of the fact that everybody had at least some space in their hearts for the cause that we were cycling so hard for.

Thank you to all those who I shared this event with, I pray that we meet again soon.”