Rami Zughayer, our first Palestinian cyclist from the West Bank, talks about his experience on the Germany cycle

“I was super glad to know that Cycling4Gaza exists. It gave me happiness and hope, happiness for knowing that there are people out there supporting the cause, and hope for realizing that I can join the C4G team and be part of the support for my people.” 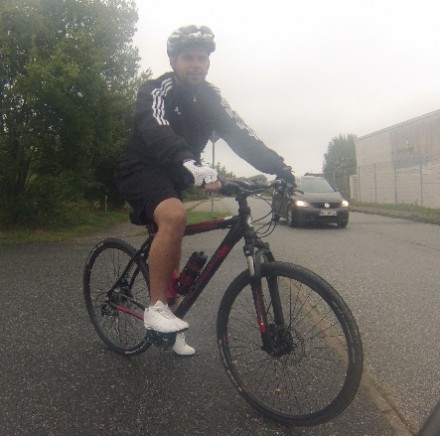 Congrats everybody, the C4G 2013 cycling challenge was an unforgettable event! Our progress matched the plan perfectly; every one of the brave cyclists travelled the distance of 350 – 410 km by bike, and we collected a total fundraising amount that has almost reached the target amount of $230,000!It is my first time on a Cycling4Gaza challenge and it really feels so good to be part of an international team of about 40 enthusiastic caring friendly heroic cyclists who have flown from their countries to gather in Germany, participate in the cycling challenge, and take action in the support of Palestinian children. This blend of sport-and-cause charged us during the cycle with energy and good moods and made us go beyond our limits!I found out about C4G in 2012 via a Facebook post, a couple of days before the 2012 cycling challenge which took place in Turkey. I admired the idea and was not lucky enough to join them then, it was too late already. By that time the situation was quite difficult in my country Palestine, there was an Israeli military attack on Gaza and I was feeling sad, tense and useless. Because a war on my people was taking place only 100 km away from me and I could do nothing about it! Not forgetting that Palestinians living in/out of the West-Bank or Jerusalem have no access to Gaza, and cannot support the people in need over there. So I was super glad to know that Cycling4Gaza exists. It gave me happiness and hope even if I couldn’t register that year, happiness for knowing that there are people out there supporting the cause, and hope for realizing the opportunity that I can join the C4G team and be part of the support to my people.Finally after waiting a year I registered for C4G 2013, and joined the team. I want to thank Mohammed Tahboub, Zara Hannoun, Tamara Ben-Halim and all who volunteered by working hard, in their own time, for planning and managing this event. The C4G 2013 was a real success, even though it was relatively big regarding the number of participants and cycle distance!  On the morning of the 19th of September, after preparing ourselves, stretching, filling up supplies and getting ready, we started our cycling challenge as one big group. The scenery on both sides of the road was naturally beautiful, we cycled in pairs most of the time and the cyclists were friendly and cheerful. We were a little bit unfortunate to have a few strong rain drops in the first and second days but the blend of sport-and-cause charged all of us with positive energy that kept us going relentlessly. I felt that this group of cyclists was a family of mine, the common blend we all had strengthened the bonds between us so fast and I made magical quick friendships that could really last forever.

This challenge was a one of a kind experience for me, I was so pleased to see people from all around the world participating in the C4G event, collecting funds, raising awareness and cycling for the cause of Palestine. This is something I never take for granted, and I will always remember all the cyclists, the special musketeers that give me hope. I am not an athlete, I am a sport lover with a random practice of cycling, I thought that I would not be able to do the 410 km because I was never trained to such distance, but with the company of the C4G musketeers it gets easier and easier, the smiles, spirits and wonderful participants are charged with enthusiasm and love, and this is the real engine that made us move and accomplish our target.