It finished with 40 people riding into Istanbul amid Bayram (Eid) traffic, chants, beeping horns and shouts of support. 33 of us had just tackled 300 kilometres of mountainous Turkish terrain, starting in Bandirma on the Marmaris sea, onto Çanakkale, Tekirdag, and finishing in Istanbul. This was by far the toughest of all four Cycling4Gaza challenges. Despite our tour guide John’s best attempts to make us believe that we would be cycling on relatively flat roads for the most part, we soon discovered that his definition of flat was any kind of hill that wasn’t a full-fledged mountain. We tackled hill after hill after hill, reaching an elevation of over 1,230 meters on the first day, gasping for breath at the top of some of the most beautiful landscapes we had seen. 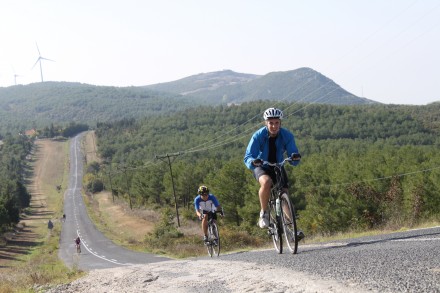 Perhaps the most memorable night was the first one. We had conquered an intimidating 120 kilometres of terrain since sunrise, and were winding down with a conversation about what had driven us to take part in Cycling4Gaza. The feeling in the room was one of purpose and genuine passion for the Palestinian cause. What was particularly striking was that so many of us emphasised the fact that Palestine is only a part of a wider conviction in basic equality, freedom, and human rights. That Palestine is important, but that it is not the only place in the world that needs people to come together to make a lasting impact. It is part of a greater picture of a fight for social justice, of taking a stand against oppression and discrimination in societies around the world. This principle seems to have been the uniting factor that brought so many of us together, and Cycling4Gaza is but one of the initiatives that works as a platform for people to lend their passion and energy to creating a positive impact on the lives of people living in injustice.

By some strange stroke of fate, this universal feeling tinged the atmosphere of the cycle from start to finish. Even our cycling guide, Sina, was an Iranian refugee living in Turkey, having left Iran because of the discrimination he faces there as a Bahai. (more on him in the coming days). And as we sat together on our second evening talking about Palestinian prisoners on hunger strike, we learned from Atil, our Turkish guide, about the hundreds of Kurds on hunger strike in Turkish prisons today who, like their Palestinian counterparts, are protesting against the policy of administrative detention.

And so what started as an effort to raise awareness about one particular situation of oppression, that of Palestinians living under siege in Gaza, has evolved into the wider Palestinian story of a people searching for their right to self-determination, whether as individuals living under occupation, under siege, or as refugees, and will continue to grow, we hope, into a universal picture of a stand for social justice around the world. 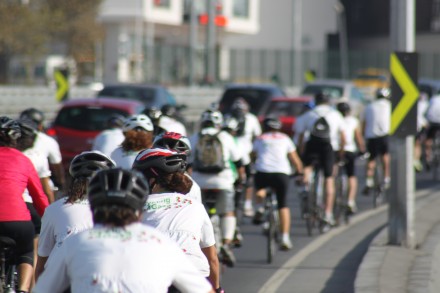