Jordan cycle takes off.. Day One 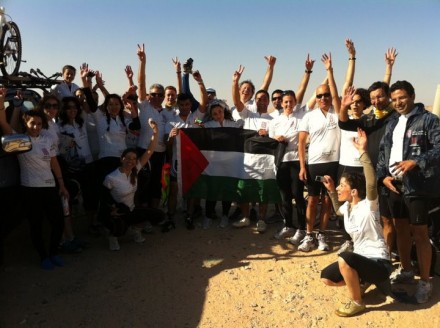 After coming into Amman from London, Scotland, the UAE and Lebanon, and catching up with our fellow Jordanian cyclists, the 26 of us congregated in Aqaba by the Red Sea, only 500 metres from Elat, late on Wednesday night, pumped and raring to go. It was early bedtime for us, as the morning saw us up, out of the hotel and on our bikes at 6.45am. We were on a race to arrive in Feynan, our final destination for the day, before sunset. With over 135km to cover before 4.30pm, this was no easy feat. 10 minutes into the cycle, we encountered our first fall. Thankfully no one was hurt and the cyclists got right back on their bikes straight away.

After 2 and a half hours of cycling, we had a quick 10 minute break (queue bananas, biscuits, and energy bars) and it was back on the bike to reach the 80km mark before our lunch stop. With a non-changing landscape, the road seemed never-ending, and our poor tour guides were bombarded with “are we nearly there yet”s. 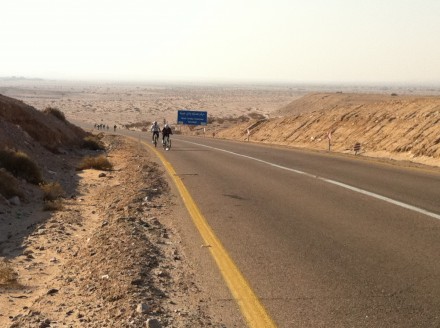 Finally, a little pit stop on the side of the road and we had a pot full of “ma2loubeh” (literal translation: “upside down” – a traditional Levant dish made up of rice with spices and, in this case, chicken) waiting to refuel us. 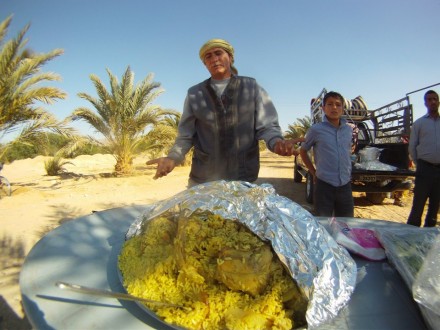 Half an hour of eating and stretching, and it was straight back on our saddles to reach Feynan before dark. On we went and, while some of us lagged behind, Mohammed from Dubai/Palestine and Nabeel from Birmingham/Pakistan were being filmed by a TV crew in a van that was blocking the lane next to them. Those who have been to Jordan will know that Jordanian drivers are not the most patient of the lot, and so they began honking and beeping their horns to overtake the TV crew and the strange cyclists in the front of them. The van stayed put, and the honking continue until Mohammed took his Palestinian flag out of his back pocket and, as him and Nabeel cycled next to each other, each grabbed a corner and held the flag out, and the honking went silent.

As we inched towards our final destination, with around 20km to go, the sun’s rays were softening and clouds were appearing in the sky. We kept moving, and the last of us reached our final stop with just 10 or 15 minutes before the sun was setting. With 143 km down, we were finally done for the day. 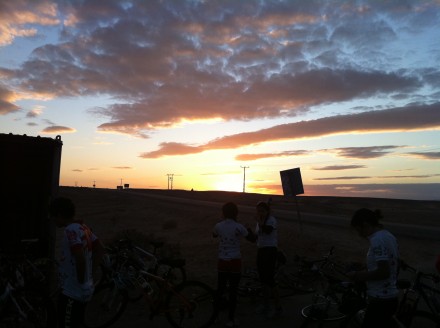 Our trusty coach took us and our jelly legs across the final few kilometres to Feynan, where pick-up trucks driven by local Bedouins shuttled us on a bumpy desert road to Feynan Ecolodge. By this point, the sun had set and all we could see were tens of lanterns lighting the entrance of the lodge (which is lit by candles only). Day 1 was complete, and we were dreading the 4.45am rise the next day, but excited for what Day 2 had in store for us.