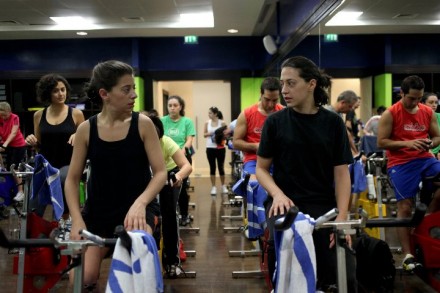 Cycling from Olympia to Athens is no small feat. The basic skills required to accomplish such a journey include good physical shape, strong mental willpower and the ability to ride a bicycle. Forty four of us could do just that. However, Natasha, my sister, seemed to have missed out on what was supposed to be a significant part of her childhood. She had yet to learn how to ride a bike, which subsequently became our mission. Learning how to ride a bicycle encompasses two basic concepts; balance and fear, both of which play major roles throughout our lives. Drawing these parallels between life and our daily activities signify the importance of each of our actions and their subsequent effect, intrinsically and externally. This was our hope; that the efforts of 45 people around the world could help change the lives of 1,800 children in Gaza.

Day one was highly entertaining, for me, but extremely painful, for Natasha. The simple thought of ‘I can’t’ resulted in a number of falls, scrapes and bruises. The brain has an incessant ability to hold onto a thought driven by fear. The result is usually an unsuccessful attempt of the action or complete mental and physical immobility. But all of that changed on day two. Natasha fearlessly jumped onto the bike and just said ‘that’s it, I am going to do this and I will!’ Believe it or not she managed to stay on the bike for a strong and steady 5 minute cycle. That may not seem to be an achievement, but from that moment on her brain let go of the fear and allowed her to move forward. The first step to any challenge is always the hardest.

Day three was mastering the art of balance and maneuvering, a slightly more technical task. The brain co-ordinates hundreds of simultaneous activities at any one point in time. Breathing is regulated in sync with the rhythm of the heart beat. Eyes receive external information, which is then processed by the brain resulting in a defined and controlled action. The brain also maintains balance by transforming sets of signals sent by visual and auditory senses into specific muscle movements. Therefore, the art of maintaining balance is to let the brain do its job and let your body follow in suit. This is certainly easier said than done. The conscious part of our brain sometimes thinks ‘it knows better’ which inevitably alters the muscles actions and results in imbalance. The secret is to not try so hard, to just let it go and all of a sudden balance is achieved. This can also be applied in life. After hours of fighting, Natasha let her brain do its job and achieved perfect balance, turned corners comfortably and even managed to jump up onto a few pavements. Anything is possible once you let go of the outcome.

Once Natasha’s fear was overcome there was nothing but smooth sailing from day four onwards. Each of us is doing our part and contributing to life what we can, hoping that it will not only make a difference in our lives but also touch the lives of others. Let us stop thinking and just do it!