The Hills Are Alive

…with the sound of suffering. Today was relentless. We were up as the sun was rising, and ready to go by 8.30am. 60 km lay ahead us before lunchtime. We set off easily enough, and reached our first two rest stops without too many problems, and only a few small hills in our way. After our second break though, we had a 25 km stretch ahead of us, and looming in the distance was a monster of a hill. Slowly but surely, one by one we managed to push ourselves up to the top and a few kilometres ahead for some lunch. As we began to reenergise and psyche ourselves up for the next stretch, our tourguide Helmut announced to us that coming up soon was a 10 km uphill for which we would need to conserve our energy. With this in mind, we set off again, and tried to prepare ourselves for what was coming. The road ahead looked deceptively flat and before we knew it, we were struggling up gruelling (albeit beautiful) landscapes. As we tried to motivate ourselves and others, some people began singing songs – perhaps the most apt of which was “Push It” courtesy of Seif – and by “it” of course, he meant the bike. Up and up we went, and just as the road began going flat and we were able to enjoy some of the beautiful countryside around us, we turned round a bend and ahead of us was a windy, bendy, seemingly never-ending uphill. Some people charged ahead, while others stopped on the roadside to catch their breath and summon up the energy for the rest of the hill. Finally, we were up and over the hill and zipping down a glorious downhill for a few miles ahead. By this point, we had completed over 90 km and our rest stop for the night, Fonteblanda, was only a few miles away. We found our dear Helmut by the roadside awaiting us, who was brave enough to try and trick us into believing we still had another 15 km uphill ahead of us. As our faces stared at him in disbelief, a smile cracking on his face gave him away and we – silently cursing him – sped ahead across the last 15 km of downhill (plus some small uphills that we have chosen to forget because they traumatised us so much). As the sun began to set and dusk was settling arouns us, at LAST we reach our village of Fonteblanda and our hotel for the night, Casa Del Forno, which looked nothing less than a mirage through our exhausted eyes.  Our palace for the night not only includes “towels” made from retirement home bedsheets, but also provide space-age toilets that fold up before your very eyes. No, really. But please don’t ask us about the flushing part.

And with that thought, we will leave you with a photo of a toilet. Or maybe a Tuscan sunset. 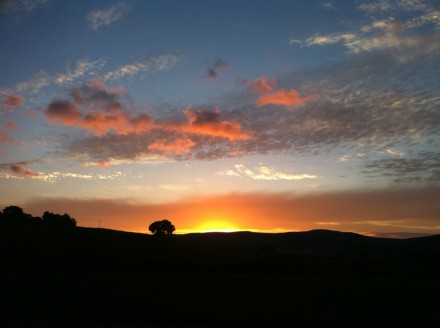