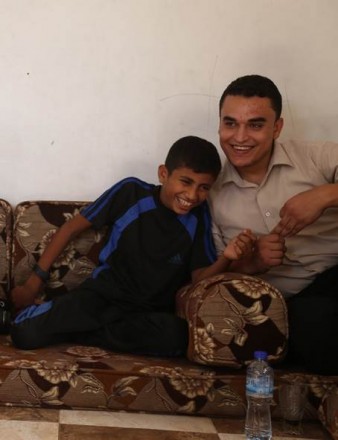 This is Ibrahim and his brother, who live in Rafah, in the South of Gaza. They are both are receiving treatment from the Gaza Community Mental Health Programme, and Ibrahim also attended the summer camps organised by the PCRF. They both tragically witnessed the death of their 16 year old brother from an Israeli bombing and sustained significant injuries as a result of the attack. Both boys suffer from intense symptoms of trauma, including bed wetting, nightmares, trembling and flashbacks. Their schools and home life were also significantly impacted by the event.

Over time, they have made various noticeable improvements since the initiation of the project. As Ibrahim said “step by step”. He is feeling more up beat and optimistic. His father was also extremely grateful to the PCRF for providing mental health support that his sons needed; and was also pleased with his son’s improvements.

Simply put, as Ibrahim said “step by step”; that is how real change can happen.