A Message from our Charity Partner – The PCRF

The partnership between the Palestine Children’s Relief Fund and Cycling4Gaza has resulted in a new era of healthcare services being provided to the 1.7 million Palestinians living under siege in the Gaza Strip.  In 2012, before the relationship with the PCRF and Cycling4Gaza, there were 18 volunteer surgery teams that went to Gaza through the PCRF. In 2013, we more than doubled the number of medical missions to Gaza, thanks to the support and assistance of Cycling4Gaza through the REACH Gaza, Reaching Every Affected Child in Gaza, project. In addition, in April 2013 we started a new project in Gaza to build up the pediatric cardiac surgery services for children born with heart disease. This project aims to identify sick babies and provide them the life-saving surgery that they need, but which is not available to them locally, as well as to train the local doctors and nurses as a way to upgrade the quality of care in Gaza.

In 2013, with the support and cooperation of Cycling4Gaza, the PCRF provided 630 children in Gaza major surgery in cardiac and cardiology, neurosurgery, plastic and reconstructive surgery, urological surgery, hand and orthopedic surgery and general pediatric surgery. We sponsor missions from all over the world to volunteer their time and experience to come into Gaza and operate on children locally.  In 2013, we sponsored teams from the USA, Canada, Chile, Mexico, New Zealand, Japan, Italy, Switzerland, Germany, France and Belgium to Gaza. In addition, we are providing children with a variety of specific medical needs sponsorship for care locally, such as hearing aids, wheelchairs, eyeglasses and other support that their families are too poor to provide for them.

The results of the relationship between the PCRF and Cycling4Gaza has been one in which thousands of children in Gaza are getting direct humanitarian and medical support that they otherwise would not have access to. We are grateful to the hard work and dedication of the Cycling4Gaza volunteers to make this project successful and we hope that we can continue to partner for the sake of more children in besieged Gaza. Until the siege is lifted and children have access to quality medical care, we will continue to do our best to bring support and care to them directly. 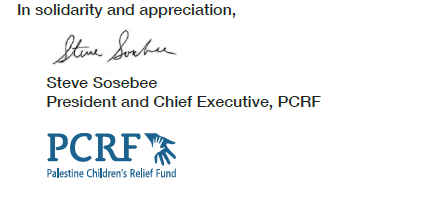