This Week In Palestine

An Article Published in This Week in Palestine by one of our own, Eyas Al-Homouz:

“Back in 2009, in the wake of the war on Gaza, a group of cyclists in London launched an initiative that utilised a fun sports activity to support and increase awareness of the plight of our people in Gaza and to raise funds for carefully selected non-profit organisations that provide critical educational and health support to vulnerable Palestinian communities. Their goal was to create a sustainable project, and it has since become an annual event that draws cyclists from all around the globe for a three-day bike ride that takes them to a different country each year. Cycling4Gaza is a fantastic way to see exceptional countryside in foreign lands, keep fit, meet interesting people, be philanthropic, and raise awareness about Palestine at the same time. 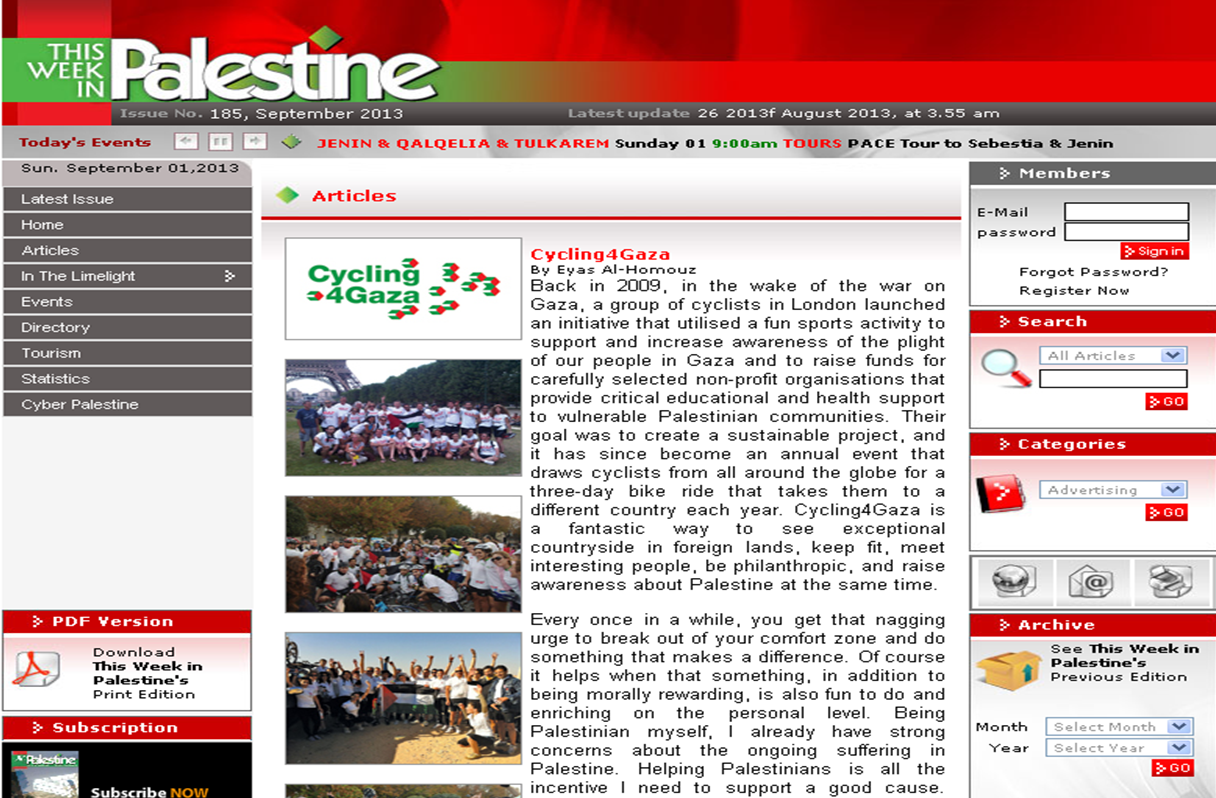 Every once in a while, you get that nagging urge to break out of your comfort zone and do something that makes a difference. Of course it helps when that something, in addition to being morally rewarding, is also fun to do and enriching on the personal level. Being Palestinian myself, I already have strong concerns about the ongoing suffering in Palestine. Helping Palestinians is all the incentive I need to support a good cause. Cycling4Gaza gives me the opportunity to do so proactively and with an amazing group of people. Thanks to my friend Jumana Al-Jaberi of the Cycling4Gaza and Visualising Palestine teams, I was encouraged to join the initiative last year in Turkey, along with a diverse group of more than 30 passionate and interesting individuals from Palestine and the rest of the world. We cycled 350 km and raised approximately $150,000 in support of Medical Aid for Palestine’s projects in Gaza.
Though challenging and literally painful at times, the experience was exhilarating and enriching on many different levels. For three days, I shared almost every waking moment with a group of people who, despite their different ages, nationalities, and backgrounds, had a passion for a sublime cause. We got up every morning before the crack of dawn, got on our bikes, and had the crisp morning air wake us. We spent the morning cycling through the beautiful scenery, chatting up the locals on our breaks, and learning more about their culture, while educating them about the purpose of our trip and the situation in Gaza.
Turkey is such a beautiful country and experiencing it on the back of a bike gave me an amazing perspective on the landscape. The three days were filled with a sense of excitement and anticipation before we began each day, and relief and satisfaction after we finished each leg. Everyone was so supportive of one another, and the trip was filled with solidarity and camaraderie. Although we still occasionally goaded each other on to create a competitive edge that would reignite our energy. The physical challenge was something I didn’t fully anticipate. We were told we would cycle through flat lands in turkey, but to our surprise we found ourselves climbing mountain after mountain. Jon, our tour guide, who is an avid cyclist himself, kept on insisting that the road was flat except for a couple of small hills.

The avid cyclists amongst us flew in with their bikes. The beginners, including yours truly, had to rent bikes in Turkey. Our bikes were mountain bikes compared with the road bikes the pros had. Mountain bikes are a bit slower than the road bikes and that didn’t fare well with the other cyclists who had to wait for us newbies. On the other hand, road bikes are prone to having flats. On one stretch Amr Bin Halim and Mohammad Alami, two of the experienced cyclists, had several of these and ended up riding the bus. We newbies were kind enough not to gloat, or not too much anyway.

The trip was not only about getting our message across, but also about getting to know others. Mina*, our other tour guide, was an award winning cyclist who sought asylum in Turkey from his native Iran because of religious discrimination. Listening to him tell his heart-wrenching story gave us eye-opening insight into discrimination directed against minorities. Mina was forbidden from participating in global evens outside of his native Iran purely because of his religious beliefs.

The outcome of the trip has made me appreciate just how powerful and influential each and every person can be. The group managed to raise a substantial amount of money for Medical Aid for Palestine, a well-deserving organisation, while also promoting awareness about the Palestinian cause. So, after a thrilling, memorable, and outstanding experience, I decided to do it again this year.

Fundraising, it turns out, is not as hard as I first thought. All you have to do is constantly nag your family and close friends, and flood their Facebook pages with links to your fundraising page, while reminding them, just in case they forget it for a minute, that every small donation counts, and every single individual can make a difference. So, all of you reading this, consider yourselves reminded and make sure to click on the link at the end of the article to support this year’s initiative.

This year’s trip will take us to Germany. On September 18th, we will cycle a distance of 360 km from Hamburg to Berlin with a whopping 45 cyclists of different nationalities and backgrounds. This year we are fundraising in support of the Palestine Children’s Relief Fund’s REACH Gaza project. The 6-year siege on the Gaza Strip has not only caused a chronic shortage of medical equipment and supplies in Gaza, it has also prevented children and their families from travelling freely in the West Bank and abroad in order to receive the urgent care and treatment they need. REACH Gaza (Reaching Every Affected Child in Gaza) aims to improve and strengthen the currently underdeveloped healthcare system in Gaza, particularly when it comes to providing surgery for children in need of medical care.

I would encourage people to get involved and support the initiative. Cycling4Gaza is not just a cycling challenge, it is an opportunity to be engaged and to actively make a difference. It is as much a test of mental willpower as it is physical prowess, and, above all, it is about increasing awareness of and supporting a cause so dear to many of our hearts.

*Mina’s name was changed to protect his identity.

Eyas Alhomouz, an activist and energy executive, currently trades off between living in the Gulf and the USA. Eyas has an academic background and training in both engineering and economics. He grew up in Ramallah. “

Click here for the article online or the PDF