The Launch of our Fifth Cycling Challenge 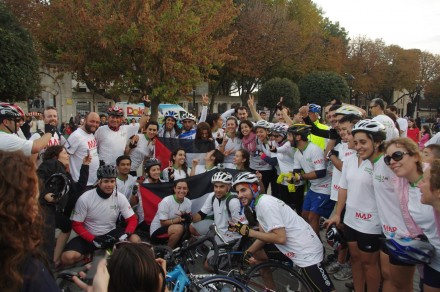 This time four years ago, a group of friends in London were frantically recruiting cyclists, organising fundraising events, training on their bikes, and embarking on guerrilla poster-hanging operations around the city. Our mission was to promote an international cycle in support of emergency healthcare work in the Gaza Strip following the 2008-2009 military offensive.  Within weeks, our modest effort had evolved into a 27-strong team of people from all over the world coming together in support of Gaza’s population. Over 3 days in July 2009, we cycled 320km from London to Paris and collectively raised over £90,000 for MAP UK ’s healthcare projects in the region.

It quickly dawned on us that we could not stop our efforts there.

Four years on, thanks to the incredible support we have received from you, our supporters, Cycling4Gaza has:

It is with these achievements in mind that we launch our efforts in 2013. As we bear witness to the six-year long siege that continues to physically and psychologically imprison Palestinians in Gaza, we know that there remains much work to be done. 50% of Gaza’s youth are jobless, 85% of schools run on double shifts, 90% of water is unfit for consumption, and over 50% of children need mental health intervention. (Sources: UN OCHA, Guardian/MSF 2010 study)

Yet we gain our inspiration from the very people living inside the Gaza Strip, who continue to try and live normal lives despite the challenges they face. We take inspiration from the young men practicing parcours (free running) in Gaza’s urban jungles, from the children who in 2011 broke the world record for the number of kites flown at the same time, from the artists and filmmakers who tirelessly share their story of Gaza with the world, and from the organisations, community leaders and activists who have not given up and who every day are making a positive difference to people’s lives in Gaza.

In 2013, we are honoured to be supporting one of those crucial organisations: the Palestine Children’s Relief Fund. This year, the PCRF is launching REACH (Reaching Every Affected Child in Gaza), an ambitious project that we are delighted to be supporting. This new project will identify every child in Gaza in need of medical care, place them in a central database, and begin to provide them with the treatment they need.

Our aim in 2013 is to raise £150,000 for this PCRF project by bringing together 40 cyclists from all over the world to embark upon our latest challenge: to cycle over 300km across Germany this September.

Download the registration pack if you are interested in taking part. The pack provides extensive information on how to sign up, the route through Germany, and where your fundraising will go.

It is only thanks to the overwhelming support of our friends, family and personal networks and the commitment of our 92 cyclists that we have been able to turn Cycling4Gaza into the standalone initiative it has become. We hope that your support and involvement will continue to give us the energy and motivation we need to keep contributing positively to the struggle for Palestinian dignity and self-determination.