Cyclist Zara Hannoun writes about the projects Cycling4Gaza supported in 2010, and how children’s lives in Gaza have been improved as a result of those projects implemented by our 2010 charity partner, the Welfare Association, starting with an individual case study of Sara from Gaza.

“Sara was registered to Atfaluna’s Early Intervention Program for Deaf Children when she was only 18 months old. The first time her mother brought her to the centre, she said, “My daughter is deaf… she does not hear me, I don’t know how to communicate with her. I don’t go out anywhere with her because I don’t know what to tell my neighbours if they ask me what is wrong with her”. Through the early intervention programme, both Sara and her mother participated in Atfaluna’s training course, which trained the mother on how to communicate better with her daughter. 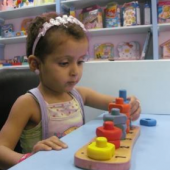 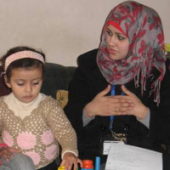 A social worker also began to carry out home visits to Sara’s family to enhance the training of both the mother and her daughter. Sara’s family showed an increased interest in the guidance and instructions they were given during the social workers’ home visits. With the participation of family and friends Sara soon became confident and fluent in sign language. She comfortably explained to her grandmother in sign language how much she loved her favourite toy.

At such a young age Sara’s communication and comprehension skills were gradually improving. Sara’s family treated her with much respect and affection and was comfortably integrated into their community. Her family explains everything they can to her. Sara’s mother is now an active member in the advocacy committee for the rights and needs of deaf children. She works hard to guide other mothers who recently discover their child’s deafness.

Sara is only one out of the hundreds of children whose lives were improved through the work of Cycling4Gaza and the Welfare Association in 2010.

In 2010, Cycling4Gaza’s Pisa to Rome cycle raised £140,000 to implement three projects focused on early childhood development in Gaza. 27 cyclists covered 400km over 4 days, with each kilometre contributing to the progress of these educational projects supported by the Welfare Association:

The projects ran from the beginning of 2011 and were successfully completed this year.

1. Children’s Counselling Programme, GCMHP
The School-based counselling programme for young children in Gaza focused on developing an effective support system for children that have been affected by traumatic experiences within the conflict zones of Gaza. A traumatic experience can include any event that has resulted in the alteration of a child’s psychological and behaviours conditions. According to a 2009 UN report based upon a fact finding mission into Gaza following the Israeli offensive on the region, children in the Gaza Strip have developed a number of symptoms in response to traumatic events, from profound depression, to insomnia and bed-wetting. These traumatic events include witnessing killings and violence of both family and strangers, to facing death themselves. The UN report also documents that at the time 30% of children in UNRWA schools suffered from mental health issues.

Through the efforts of the 27 cyclists in 2010, the Welfare Association was able to partner with The Gaza Community Mental Health Programme “GCMHP” to develop and implement a counselling programme throughout 6 schools in Gaza over 10 months, in addition to organizing and running 6 summer camps. The summer camps were run for 10 days, 4 hours each day in 6 different areas throughout Gaza. 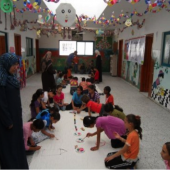 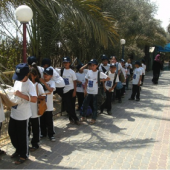 The program successfully provided 675 one-to-one counselling sessions to 329 children. 217 teachers and parents were better equipped to detect behavioural changes and helped in providing support mechanisms to these children. 24 personnel within the schools received 20 hours of training, improving the schools ability to provide the required support. The offices of the schools were re-equipped with furniture and electrical appliances and the classrooms were provided with toys and other resources required for the counselling sessions. The summer camps reached over 300 children where 6 recreational trips were organized including trips to the zoo and the beach. The summer camps were not only an effective method to reach the children, but also to involve their families in the therapy process. Assessment of the program on completion highlighted the importance of providing support mechanisms to children suffering from psychological issues. Children that participated in the program demonstrated enhanced social interaction and society re-integration. Their self confidence and self-esteem was significantly improved, contributing to their overall happiness and well-being.

2. Outreach Intervention for Deaf Children, Atfaluna
Whilst the first project focused on providing psychological support, this project was developed to provide both practical and psychological support for children with hearing impairments and their parents. Due to the nature of the society, parents have significant difficulties coping with children who have hearing impairments. This in turn affects the child’s ability to integrate into both the family unit and the community, especially at very young ages. In collaboration with the Atfaluna Society, the funds raised from the 2010 cycle were used to improve and develop Atfaluna’s outreach home based early intervention programme for deaf children (0-5 years of age).£31,535 was contributed, funding the project for a full year.

Overall, Atfaluna was able to increase the number of families it was able to help by 40%, taking on 53 new children, where over 80% of the children significantly improved their communication and social skills and considerably developed their cognitive abilities and speech acquisition levels (sign and verbal). Over 5,000 sessions were conducted in children’s homes, consisting of 2,920 educational sessions and 2,860 psychosocial sessions. 53 mothers were trained to develop their communication and interaction capabilities with their children; where over 95% of the mothers indicated that this program significantly improved their inter-family relationships. 93% of mothers also indicated that the social communication skills of their children with family members developed, helping their children to become more integrated in their surrounding environment.

The program has significantly improved the lives of children with hearing disabilities between the ages of 0-5, defined through the observed outcomes. The program also extended to improving the situations within family households through better internal communication, in addition to the successful integration of deaf children into their surrounding environments and society at large.

3. Early Childhood Development in Kindergartens, Kanafani Development Association
The Support for Early Childhood Development programme was implemented at the Kanafani Kindergartens, run by the Kanafani Development Association which operates 4 kindergartens with 700 children enrolled within the Biet Hanoun and Jabalia areas of Gaza. Due to the difficult circumstances in Gaza and restrictions as a result of the blockade, the schools were not fully equipped and needed renovation. Through Cycling4Gaza’s efforts, enough funds were raised to support 275 preschool children with new uniforms, schoolbags, stationary, shoes and winter jackets for an entire academic year. 70 children were provided with a full academic scholarship for a year’s enrolment into the schools in combination with the other tools mentioned earlier.

In order to create a stress free environment and to allow the children to fully enjoy themselves, 17 therapeutic and recreational activities and 9 educational and recreational trips were organized. 2 kindergarten facilities were upgraded and refurbished. 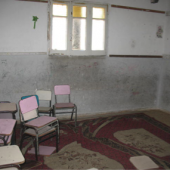 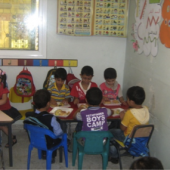 A 7 month nutrition programme was implemented, whereby daily meals were distributed to all the children. The nutrition programme successfully reduced anaemia in 32.5% of the children. In addition to the health eating programme; 6 sessions for health awareness for mothers were organized by the nutritionist. Pre and Post surveys regarding general knowledge of child health and development, nutrition, eating habits, and hygiene were taken. An 85% improvement in interaction and correct answering was observed following the completion of the awareness sessions. Overall £71,765 was required to achieve these objectives over a 16 month period.

Funds raised were also used to train the entire staff on improving children’s engagement, social and communication skills and contribute to their overall happiness. 14 staff members also received financial support in the form of salaries over a 9 month period. The project successfully reached KGs in the most marginalized areas of Gaza, where harsh economic and social conditions prevail. The project enabled children to access quality education at a minimal cost to their families. All basic school needs were provided. The environment of both KGs was improved, and the project enhanced the nutrition and health of the children, positively changed their eating habits in the long term. Finally, the project has raised families’ awareness on nutrition, health and hygiene issues in order to sustain the achieved results in the long-term.

Abdul Kader is one of the children who attended a Kanafani kindergarten (GK KG D, Stage 2) in Jabalia, where he lives. Initially, during his time in KG 1, Abdul Kader was continuously absent and did not enjoy going to school. But during this project year, Abdul benefited from the psychosocial sessions and enjoyed the recreational activities and trips provided. Throughout the year, staff at the kindergarten reported an improvement in Abdul Kader’s attendance. His mother noted that “Abdul Kader became a different child. He is socialising more actively with his relatives and cousins. His self-confidence has improved. He wakes up every day early, before me, so as not to miss going to the KG. Thank you for changing the attitude of my child and bringing happiness to him”.

In one year alone, 27 cyclists created a chain of events that impacted the lives of 657 children, not to mention to their families, teachers, counselors, volunteers and communities at large. If 1 person is able to positively impact the lives of 24 children and their families, can you imagine the possibilities?