On Gaza, from Kashmir 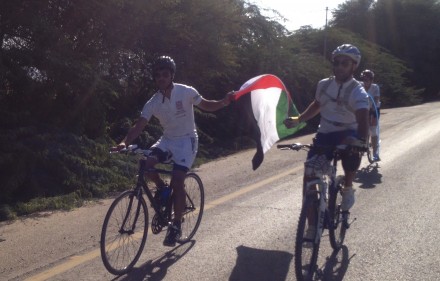 The Pen I carry to write this inaugural blog seems incredibly weighty.

The pen of course being composed of my fingers tapping away on the keyboard, the weightiness of the blog coming from my experiences of last year’s Cycling4Gaza event and the inspiring educational projects being supported through this initiative.

As a newcomer to the C4G group, I felt like a bit of an outsider when I originally signed up to the event. It was also with some apprehension that I did sign up – what would the group be like, would I fit in, would the cause be what I expected it to be. Living in a world where people comfortably say one thing and mean another (cue politicians), I was concerned the cause and the people may be a little misaligned.

Thankfully, all my concerns were unfounded. By the time I had attended a few fundraising events and met up with others on the cycle I realised that the cause, people and events were all there for one single purpose – the people of Gaza.

Being of Kashmiri origin myself, relating to the plight of the Palestinian people is not something I’d have to change my frames of reference for. The Kashmiris themselves have many problems. Palestinians however, have problems that represent the extreme case scenario. The situation on the ground is dire, the coverage by the press is extensive yet heavily skewed, to the extent that most events will go reported, but the reporting will not always be complete. Outside of Palestine, the bias prevails. Recent examples come to mind such as Mark Thompson of the BBC taking it upon himself to ‘veto’ the word Palestine from a protest song and presiding over decisions to prevent the broadcasting of appeals for the Palestinians. Why? To maintain impartiality of course. It’s difficult not to get sidetracked on this topic but we’ll revert to the cycle itself and leave the politics out. For the moment!

During the 3 days of our cycle across Jordan, we were privileged to have with us a Palestinian cyclist from Gaza who had now moved away from the Gaza Strip, but who visited often enough to fill our evening with anecdotes on life there. He would regularly travel to Gaza to see family and friends. His detailed personal accounts of the situation seemed to almost put us there, in his shoes, sitting in the house of an Egyptian family close to the border, climbing down into the sandy tunnels. Tunnels each of which are dedicated to certain types of commodity. Analogous to the points of entry for contraband in a prison (prison being particularly relevant in this analogy). Points used to bring in forbidden items such as drugs, alcohol, weapons and so on. In this case, however, replace contraband for any essentials in life. Food, drinks, clothes and maybe even the odd occasional luxury such as soap, sweets and we daresay, a bicycle.

It was interesting to learn about the operation and nature of these tunnels, essential to the survival of the Palestinians. When Israel put an effective stop to the transportation of any construction materials into Palestine, the tunnels proved to be the lifeline to the Palestinians. Each school would require 220 truckloads of construction materials to be brought in. Some say 100 new schools are needed to cater for the number of children. That would mean 220,000 truckloads to satisfy this demand. Yet since 2007 no schools have been built and Israel has agreed to ‘negotiate’ on allowing materials in for 8 of the required 100 schools. Coupled with the fact that only 250 truckloads of goods are allowed into Gaza every day, most being utilised for food and medical essentials, one can easily see how the education of Palestinian children in Gaza is being heavily compromised. For more on the status of construction materials entering the Gaza Strip read this article in the Middle East Monitor, and for a glimpse of work in the tunnels watch this video from B’Tselem

Being the first entry for our blog in 2012, I’ve forced myself to keep it brief and now reluctantly pause for a breather. In the next few entries we’ll introduce some further anecdotes from our fellow cyclist from Gaza. We’ll also talk about the 3 projects in Gaza that have benefited from last year’s cycle and and get a view on what is to come in 2012.