26 bicycles.. Thoughts from a cyclist 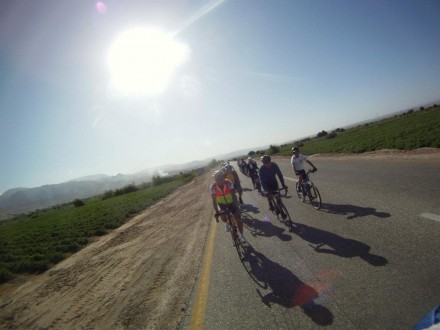 26 bicycles wheeled over Jordanian asphalt for 350km for three days, some of it smooth, most of it graveled, and some cracked. but the 52 wheels made it. the pilots of those bikes found deep fulfillment not only in overcoming a physical challenge but mostly, in having done so for a cause close to one’s heart, Palestine. For urban people counting on cars and public transport, moving one’s legs in loops for 8 hours in a row is no small challenge. There’s also a great deal of freedom in doing so, especially on downhills. Joy, pure joy overshadowing physical pain. 3 days of cycling, close to 9 times the length of Gaza, or 3.4 times round the edges of Gaza (40km Mediterranean Sea, 11km Egypt, 51km Israel). To cycle 3+ times around Gaza would have meant a first round to get to see Gaza at first glance, a second round to capture what was missed the first time, and a third to come to know it, if only on an urban level. But by doing so, we would have crossed 51kms of no-go-zone where we would have been moving targets for Israel (up to 1km of land from the Israeli border inward is a no-go-zone that is deemed a security area by Israel, eating up 17% of the Gaza Strip). So our perimeter would need to move inward into Gaza, probably pushing the 3.4 times round Gaza to 4 times or so. So the fourth round would be the point of familiarity, where we would find the urge to cycle into the heart of the land, cycling from city to refugee camp and so on. But doing that would require care, as 13 cyclists from the 26 are female, and cycling for women in Gaza has its taboos. This new realization, that women riding bikes in Gaza is like women driving cars in Saudi, makes one reevaluate the choice of sport to raise awareness about Gaza. Or, it actually calls for a realization that this is both a campaign to bring people to think about Gaza but also, a campaign to raise awareness about cycling as a legitimate sport, and a mode of transportation for women as it is for men, and children. But is it a mode of transportation for anyone in Gaza? There are no real signs of that online, and the hope is, that by the time Cycling4Gaza 2012 comes, we will have gotten closer to understanding the meaning of a bike in the Gaza context, so we feel that our cycle is shared with those within that 102km boundary.