All Roads Lead to Rome

Our final day. Up at 7am and ready for our toughest day of cycling. Quick power breakfast and a group gathering, in which dearest Helmut assured us it would be smooth sailing with just a bit of uphill for the first 30k. “As always” (as he is so fond of saying), he lied. “Just a bit of uphill” loosely translated from german into hardcore mountainous roads. With no chance of a warm up, we immediately hit the uphills out of Tarquinia. We kept at it with just a 5 min break every 20km, all too aware of the great distance we had to cover to reach Rome by dusk. While on a particularly harsh uphill, one of our cyclists’ old injury was awakened, as his back suddenly gave in. Despite many attempts to coax him into the support van, his determination (and Palestinian stubbornness!) could not be fought down as he walked his bike round the bend and attempted to get back on. On our break, the pain became too much and he realised he could not go on. Upset and frustrated, he finally agreed to go in the van until the pain subsided. On we went, and it was more uphill towards lunch. It was at this point that the weather began to turn and it started drizzling. As we regrouped and realised we had lost 4 people who’d missed a turn, it began pouring. After waiting around for ten minutes, we had no choice but to continue on to our lunch stop and hope the support van would find the others. Helmut cautioned us to cycle very slowly as it was still raining and we were going down slippery cobbled roads. As some of us turned round a bend, we saw 4 bikes strewn on the ground in the middle of the road. Fearing the worst, we jumped off our bikes and yelled at the cars behind us to stop. Soon werealised no one had been injured but 4 cyclists had slipped in the same place one after the other, falling on their side. After making sure everyone was fine, we finally sat down to lunch, all very shaken up, wet, cold and hungry. Nothing that industrial amounts of pasta and positive energy couldn’t fix though. As soon as we finished eating, it was off again, with another 45km to Rome. Thankfully the rain had stopped by now, and the uphills were far behind us. As we inched our way towards Rome, however, the roads became bigger and the traffic was getting worse. We regrouped several times and it was time for some serious teamwork to ensure a safe entry into the city for our convoy. Two cyclists were designated to lead the group, two in the middle to keep everyone in check, and two at the back. As we cycled through tunnels and semi-highways, people began chanting “free free Palestine” and a variety of other chants, including an attempted Italian one .. “libra libra palestina?!”. As we hit a bottleneck coming into the city, Helmut in the car leading us and Giovanni (sweetheart italian, secretly adored by all the girls) at the back were caught in the traffic and we were forced to go ahead. We continued on, hoping the group leaders knew where they were going. After a few km we stopped, with no idea where to go, and by some miracle we heard a honk behind us as Helmut and Giovanni had caught up with us. We powered on over massive roads with cars of all shapes and sizes zipping by, until we reached the river Tiber. At this point we were alone, as the vans could not come into the city with us. Our group leader, David, who knew Rome well, began navigating us 26 cyclists through Saturday evening Roman traffic, which was no easy feat. As it grew dark, we attempted making our way across traffic lights altogether in single file, but it was no use as lights kept changing and cars began honking at us. Suddenly an amazing thing happened.. Amir, one of the cyclists carrying the back of the convoy, began stopping right in front of cars to allow for us to pass. Initially we all thought he was mad, but it soon became apparent that this was actually the safest way to get everyone across. So Amir continued with his brave heroics as we made our way past the beautiful Piazza Venezia and across towards the Fori Imperiali. As we turned a corner, the Colosseum appeared in front of us and everyone began whooping and screaming and shouting. We zoomed around to the main entrance, and finally we had reached our destination. We threw our bikes on the floor and began hugging one another and congratulating each other. And just on the other side, a group of friends, family, representatives of the Welfare Association, and activists from Rome were there to greet us with banners and huge smiles. Despite having waited for us for 3 hours, they were ecstatic to see us arrive. Queue in photos in front of the Colosseum, a very messy attempt at a Palestinian dabke dance (a tradition from last year’s cycle) and some more hugs and kisses, and all was complete in the world of Cycling4Gaza 2010.

Well done to everyone who took part, it was an incredibly gruelling challenge, but we did it in the end! Thank you to everyone who has supported us in every which way this year, you have been wonderful, and thank you for reading! 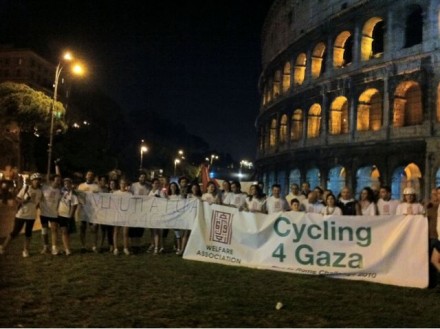