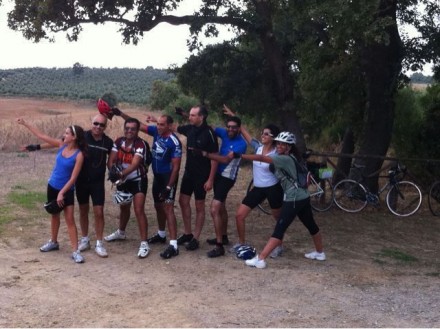 (above – pointing towards Rome)

Day 3 in the Cycling4Gaza household. An extra half hour of sleep last night allowed us to recharge our batteries properly. Off we were again and within an hour we were clawing our way up a 200m climb to make our way towards the next rest stop. After some more rolling hills and a hugely satisfying zippy downhill to lunch, Helmut informed us of a change of plan in the route as the roads ahead were too dangerous for us to cycle on. We cycled back up the way we came, took a 20 km detour and after considering breaking the law and cycling across a highway (at Helmut’s suggestion!), we decided to err on the safe side and have the van shuttle us across. Once off the highway, it was back on our bikes for the final 25km of the day. All was smooth sailing until Helmut gathered us for a quick stop to inform us that the final 10km was a sharp 300m climb winding up towards our hotel. Some of us stopped to gather our energy while others soldiered on. Up an up we went, as we began to enter the charming old town of tarquinia. Just as we were turning round a hairpin bend thinking the worst was over, we glimpsed the sharpest uphill stretch yet. We summoned all our energy for the last kilometre, inching our way up as thighs were burning and bums were aching like never before, until we saw our angel in a blue shirt, Helmut, on the side of the road, ushering us towards our hotel. We entered the gates of Tarquinia and finally arrived at the top of our devil hill, greeted by plenty of bemused looks from the locals. Soon enough they will realise that spandex cycling shorts are the ultimate fashion this year.
So another day is over, another loud and mad group dinner has passed, and the night even saw some “special performances” by some of our cyclists (no surprise these happened to be courtesy of our Scotsman and Lebanese-Austrian) in which we raised over €1500 – all in the name of a good cause.
And for tonight, we leave you with a picture that shows the true meaning of camaraderie for aching cyclists.. 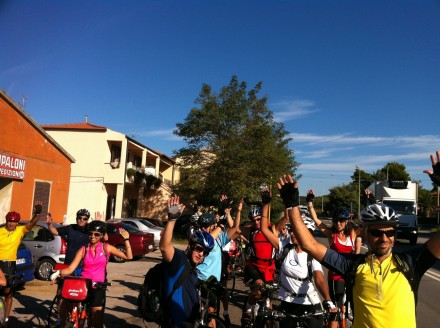