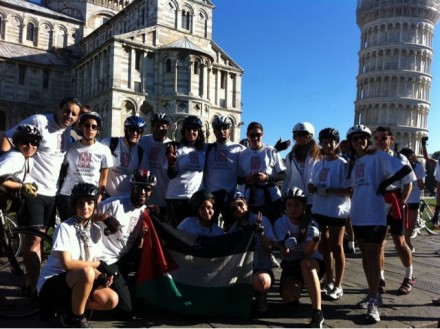 Woke up this morning at 7 am bleary eyes but ready to go. After getting our gear together, adjusting our seat heights, finding misplaced front wheels, doing a headcount, getting our map routes and an apple, we finally made it to the starting point- the leaning tower of Pisa! We managed to get everyone together for a photo only to be threatened to be kicked out of the piazza by the Italian police, who were evidently scared to tears upon seeing this foreign invasion of cyclists. Finally, we were off and headed southward out of the city. We had 60k to go until lunch, and were progressing happily until the second break. One of the cyclists, Amir, whose bike went missing in London had been behind us, having stopped at a bike shop outside Pisa. Amir insisted on cycling alone to Pisa and back to catch up with us, as he had been unhappy at not having started where he was supposed to. An ambitious target – 100k in just 2 hrs – but he did it! We continued on through busy main roads, dodging trucks and lorries aplenty until we finally reached the quiet country roads. On we went, motivated by the ever-nearing lunch break, and we took on the looming hill ahed of us to stop for some well-deserved carbs. After filling our bellies, we continued on, powering through the next 40 kilometres with no break. The final 20k stretch was a tough one, as the muscles were seriously burning by now and the straight road ahead of us seemed to go on forever. Then all of a sudden, as we slowly made our way over the last hill, there it was, the sea laying in its glory, waiting for our arrival. We sped ahead and as we arrived outside the hotel, first one into the sea was our token scotsman Tabrez, who managed to get stung by a jellyfish (!) of all things. After no offers of a urinary donation to his sting, a couple of us escorted him to the nearest pharmacy for a supply of ammonia. Finally, it was time to rest, as we sat by the sea and drank in the sunset. We’ve now had a three hour long dinner and, after much anticipation and talk over next year’s cycle, are ready for some serious rest. Good night everyone, til tomorrow! 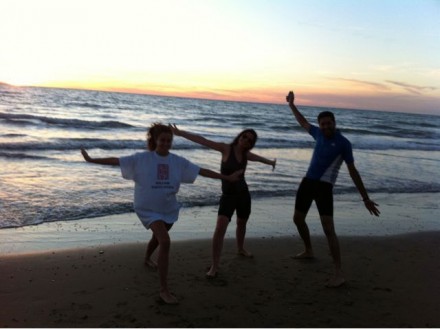